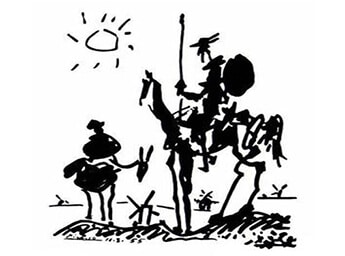 As people struggling to locate our coordinates in a new and uncertain world, we navigate between our natural reality on the one hand, and our imagination on the other.

Perhaps we need to meditate on such a subject and escape to the imaginative world of Prospero, Caliban, Don Quixote, Sancho Panzo, Mr. Fogg, Passepartout, Auden, and Jeeves—to distract (and refresh) ourselves with the hope that doing so will return us to the social, physical, and historical phenomena swirling about—and within—us, so that we can come back to ourselves when the pandemic ends with enough spirit to lift any unnecessary gloom and the wisdom to enjoy a more balanced, enlightened, and jovial sense of time.

What follows, for those interested in a daydreamer’s meditations, are a few reflections that came of contemplating “Balaam and His Ass.” (which can be found in The Dyer’s Hand, a volume of Auden’s prose about which I’ve written elsewhere).

Meditation #1: The Relationship Between Truth and Imagination

“The natural is always without error, but the other [that which is of the mind] may err through a wrong object or through excess or defect of vigor.” – Dante, Purgatorio XVII (tr. John D. Sinclair.)

Imagination extends limitlessly into the universe. Its possibilities are ecstatically—seductively, intoxicatingly—infinite. “Without imagination, I remain an innocent animal, unable to become anything but what I already am,” writes Auden. To have no imagination is to be dead. But imagination’s playful enjoyment of infinite possibility, its blissful ignorance of the impossible, exists only to the extent that imagination remains within itself. Spurred on by desire, it ventures into nature to feel embodied existence, and meets with limits that render its imaginings unfeasible.

Facing the prospect of economic disaster, the U.S. President imagined a harmless, mild virus that would pass without much ado. Strong desire for a healthy economy urged him to imagine the virus would pass with little or no consequence. He denied the claims of scientists, the World Health Organization, for example, and dismissed the science that spoke on nature’s behalf. However, eventually nature asserted itself so forcefully that the President’s imagined possibilities became impermissible—and unreal. (His well-meaning wish to banish the virus by Easter was destroyed by scientists’ warnings of death).

The Tension between Nature and Imagination

Even now, there exists in our land, a profound tension between nature and imagination. To impose imagination on nature—to pretend that what is limited is limitless—is a fatal miscalculation. But to succumb entirely to nature without imagination leaves no possibility for one to become more than what nature determines, which leaves us beasts: uncreative and  enslaved by our environment, unable to participate in the process of becoming—of becoming and living as imaginative, creative beings who endow the material world with spirit. Events such as famine, plague, war, or the collapse of a nation, are spiritual, as much as they are physical, wounds. They limit the physical possibility of realizing anything we might imagine—a capacity born of the infinite, spiritual aspect of our (human) nature.

I don’t blame a President for wanting to maintain the spiritual, imaginative heart of a nation. But to do so by disregarding nature, is an unwise course, and a species of delusion that will harm rather than help any citizenry the President has vowed to serve.

If I were to enter a boxing ring with Mike Tyson, imagining myself to be a great heavy-weight boxer, I would surely meet with nature most bitterly, and much to my physical detriment.

A Self-Imagined Expert is Not an Actual One

A self-imagined expert is not an actual one. Perhaps as a society we have strayed too far from genuine truth. Is our detachment from basic, immediate reality not the more serious threat to our (and our nation’s) health and well-being than, for example, a virus dubbed ‘COVID-19?’

Meditation #2: The Imagination of a Holy Fool

Imagination is a factory of notions and possibilities. Infinite options appear from nothing. Imagination prints its own money, endlessly and forever. Its possibilities are limited only by imagination itself, which grows in power to the extent that it’s cultivated by experience, the literature (of letters and science), and education. Reading the teachings of great Buddhist Masters, for example, informs my imagination about possible ways of life—a peaceful existence in the mountains among flowers and trees with perhaps a cow, and a small group of friends with whom I’m studying truth.

The Realizing of our Imagination in the World

A notion is realized when desire brings it from imagination into the world—into nature—and when the sheppard-ed notion, now with its form in the world, survives. When our imaginings are realized in nature, we’re most happy. Of course, the realization of our imagination in the world, though it satisfies us greatly, does not mean that others are happy for its realization. Different objects of imagination, upon becoming realized in the world, have different effects. Hitler’s imagination unleashed the Holocaust. Jesus’s imagination gave humanity a way to bear earthly suffering, and all of those who gave birth to the Judeo-Christian teachings, as well as the ancient Greeks with their science, plays, poetry, and philosophy, contributed to the imagination that set the foundations for Western Civilization.

Faced with pandemic, we have at our disposal a trove of documents that can be used to address both our personal and social response.

The Buddhist will ask: how might this opportunity be used to bring all those who wish to awaken to awakening? How can this circumstance be used to raise Bodhi Mind?

I have seen a number of young artists and photographers trolling about Varick St. and the relatively desolate streets of the West Village, filming or photographing the signs posted on closed shop-doors announcing modified business hours and (hopefully) temporary closures due to COVID-19.  Artists use imagination to make art, to create meaning out of what’s going on to help us deepen our understanding of ourselves, so that we’ll emerge with an enriched appreciation—more love, trust, and respect—for who we are as people and a society.

I believe we ought to support—as sponsors or practitioners, or both—such spiritual, philosophical, and artistic efforts, even when we fear for our lives. Perhaps, in such circumstances, especially so—if we have the surplus and the means to do so. Write a poem, start a garden, do a weekly run—or sit in meditation, in silence, on a bench by the Hudson—with a friend.

Regrettably, I fear that American culture, though it does have the means to support art and enlightenment, has become so systematically debased and callous that any real virtue, any appreciation of anything more than that which supports the economic system and the psychology required to keep it running (though these things are important), that what nurtures goodness and genuine well-being, is barely—if at all—recognizable.

If art is made these days, it’s largely for status and profit—because without support, an artist can’t survive. This has brought about the tragi-comical state that anyone voluntarily sacrificing his or her interests to bring about the realization of wisdom and compassion is seen as a fool, a kind of Don Quixote—who, as Auden reminds us, is “perfectly well aware that he has failed to do anything which he set out to do.”

The Holy Fool Who Obeys a Sacred Calling

This is Cervantes’s poignant message: better to be a holy fool who obeys a sacred calling than the hypocrite who pays lip-service to virtue, blind to their moral and spiritual shortcomings, and too lazy, hardened or proud to change their ways. But also, that we, through our environments and the choices we make and have made as individuals over centuries, have created the world in which we live.

Indeed, what we do with our imagination, and how we choose to realize it in the world—what we help into life, what we choose to support, however we chose to support it (mentally, spiritually, emotionally, economically, physically, or with our attention), has profound consequences for our own life, and the world that is always acting upon us.

In the social rupture caused by pandemic, what is our opportunity? Who do we need to be? What do we need to do? It will benefit us to answer such questions—asked out of concern, not just for the body, but for the human spirit—with an honest look at the effects—and effectiveness—of our power.

To master the art of well-being one must come to know that that which nourishes the body, nourishes the mind, and vice versa. I began Rolfing at the behest of my first Zen Master before he died at the age of 107. I would spend three hours at a time with him, every day for months on end, Rolfing his aged body. I was lucky to be able to be in such a position. I miss seeing people in this way now that we are all subject to social distancing, for Rolfing is a kind of meditation for me—moving in response to a body and its life is an enjoyable meditation.

People often ask me what they can do between sessions to maintain the results of Rolfing. I have been asked this since I began working with people in 2006. And, among other practices, I often recommend meditation.

Meditation doesn’t need to be the cross-legged sitting meditation I did for over 10,000 hours in my ten years at a monastery. One can garden, walk, landscape, run, or cook. Many physical activities, by the power of their natural rhythms, help the mind settle, smoothing and harmonizing its sometimes sharp and jagged edges.

Bringing the Mind and Body to Harmony

My endeavors, whether they be through Rolfing or the spiritual life and meditation coaching I do with people help to make the body and mind more supple, flexible, and fluid. But the aim of this fluidity is to bring the mind and body in harmony in such a way that one can move freely between one’s imagination and natural reality, realizing both in such a way that people are happy for the accomplishment.

My wish as a healer is to help every member of society return to themselves, to a genuine experience of life so that one by one we can return our nation to truth. I don’t know if I will succeed, but I, like Don Quixote, am willing to pick up my lance, follow the way of an errant knight, who, however foolishly, knowing that I will likely fail, shall nevertheless obey my calling if only because it’s there and there is no one else to do it.

I hope that someday, one or two more fools will join me.

PrevPreviousHealing Democracy
NextHow to Save Your Spirit in a Turbulent WorldNext